Tow Operator Does His Part 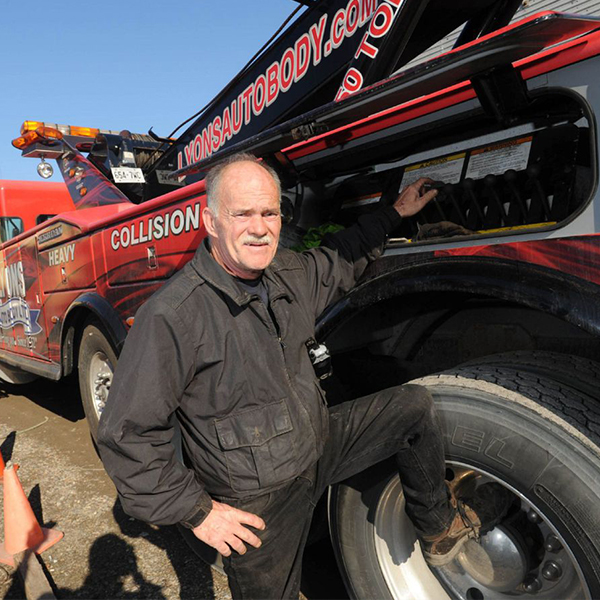 Tow Operator Does His Part

Hero. Mississauga tow truck operator Steve Matchett played a crucial role in rescuing Oakville’s Edyta Tobiasz after a tractor-trailer exiting Hwy. 403 at Dundas St. in Mississauga rolled over onto her Mazda, trapping her inside for about two hours on Monday afternoon. Staff photo by Fred Loek

When the pressure was on, Mississauga tow truck operator Steve Matchett rose to the occasion.

It was Matchett, 56, who played a crucial role in rescuing Oakville’s Edyta Tobiasz after a tractor-trailer exiting Hwy. 403 at Dundas St. in Mississauga rolled over onto her Mazda, trapping her inside for about two hours on Monday afternoon.

Matchett, who’s been with Lyons Auto Body for 35 years, used a 50-tonne hydraulic winch attached to a large rig to lift the trailer off the woman’s car.

For the better part of an hour, Matchett raised the trailer by a few inches at a time so firefighters and other rescue workers could slip wooden blocks as reinforcement between the truck and the ground. He knew Tobiasz was alive and understood even the slightest mistake on his part could have caused the trailer to slip and crush the vehicle, and the woman.

“When you’re dealing with a life-or-death situation like that, the pressure is unbelievable,” said Matchett, who had high praise for the firefighters and other emergency workers from Peel and Halton. “You’re only playing around with a couple of inches and there’s absolutely no room for error.” Tobiasz was taken to St. Michael’s Hospital in Toronto by air ambulance.

A short time later, she walked away with no injuries. Matchett, who several years ago used the winch to rescue a teen trapped in a car, said he was thrilled to see Tobiasz escape with her life.

“It was just a moment of utter relief and elation,” said Matchett, who lives in the Burnhamthorpe Rd. W. and Erindale Station Rd. area. “I was really happy for her. You just do what you have to do at the moment and hope everything turns out. The only thing I wanted was knowing that she was okay.” When he first heard about the crash, Matchett was working in Oakville in a smaller tow truck. After arriving at the scene, he couldn’t believe someone had survived the horrific crash. “I asked if it was a recovery or a rescue. When I heard it was a rescue, the adrenaline started pumping,” he said. After returning to the Lyons location on Burnhamthorpe Rd. W. to grab the larger rig with the winch, he raced back to the scene.

Matchett had a chance to speak with Tobiasz before he started. He told her there would be some noise as they moved the trailer and that he was going to do everything in his power to get her
out. Most feared the worst when responding to the crash, but all were elated to see it end happily. “It was a miraculous recovery,” said Ontario Provincial Police Sgt. Dave Woodford.

“If you look at the situation we were faced with — a tractor-trailer on top of a car — it’s amazing she came out with virtually no injury.”