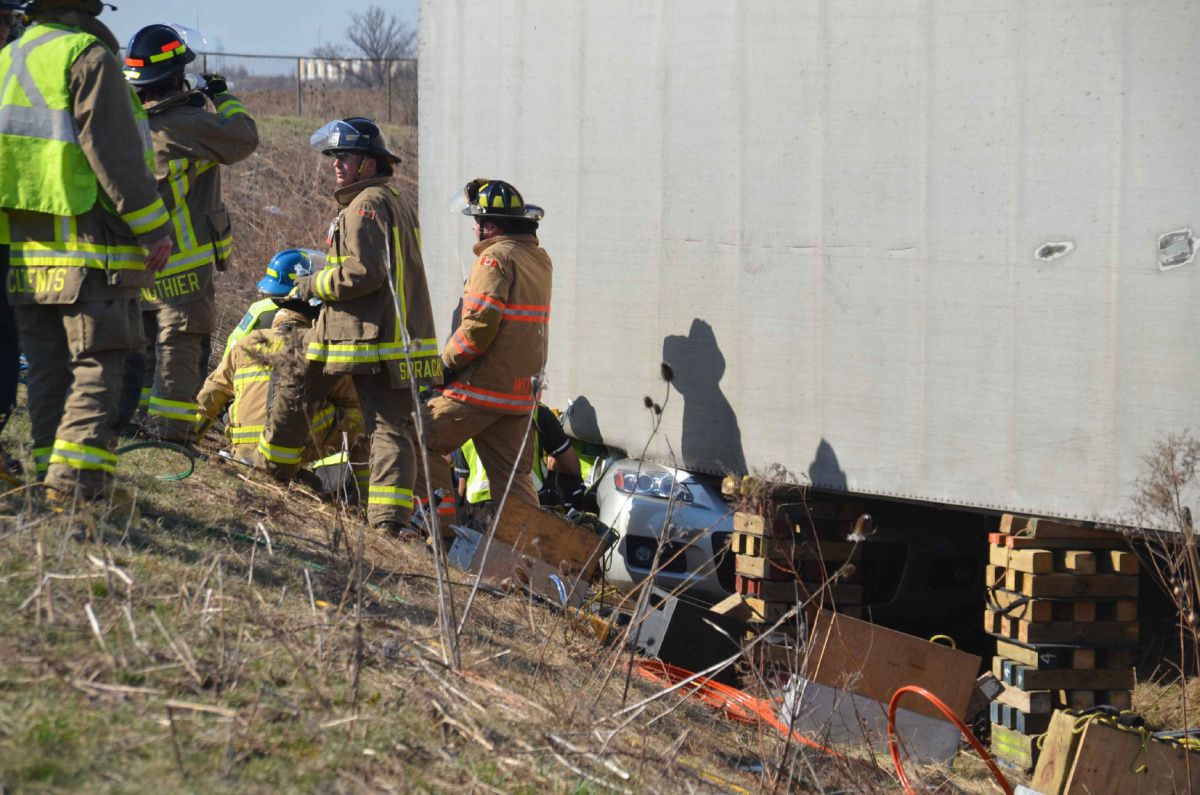 Miracle on the 403. Rescuers from several forces banded together to free Edyta Tobiasz from her crushed Mazda last year. Amazingly, she emerged uninjured after being trapped for two hours under the tractor trailer.

MISSISSAUGA — Tow truck drivers and police officers work together routinely at crash scenes. But, the combined efforts of Lyons Auto Body’s Steve Matchett and Port Credit OPP Const. Andrew Duncan last year on Hwy. 403 in Mississauga were anything but routine. As most would attest, they were heroic. The two men are the co-winners of The Mississauga News sponsored Community Hero Award, which will be presented to them on May 16 at the annual Civic Awards Reception in the Grand Hall at the Civic Centre.

Duncan, 35, and Matchett, 57, were part of a team that worked meticulously for two hours to rescue a terrified Edyta Tobiasz after a tractor-trailer toppled onto her vehicle on Hwy. 403 at Dundas St. on
March 19.

Duncan joked that he had to make sure one of his co-workers wasn’t playing a prank on him this morning when The Mississauga News e-mailed him to inform him of the award. The officer said he was refuelling his cruiser near the end of his shift when he heard the dispatch on that fateful day. He wasn’t sure what he’d see.

“This was absolutely as bad as it sounded when it came across the radio,” he said. The SUV pinned by the truck was so battered he thought it was a car. Paramedics told Duncan a woman was trapped in the crushed Mazda. He got as close as he could to talk to her, to see how alert she was and to try to reassure her.

He reached into the car and she grabbed his hand.

“I explained to her what was going to be happening, that unfortunately, it was going to take more time than less just given the complexity involved.”

Tobiasz was on her way home to Oakville, she told him, and she kept repeating that she wanted to see her husband. “I just wanted to be a friendly voice in a situation that I’m pretty sure was frightening for her,” he said. While Duncan tended to the woman, Matchett was working away.

Matchett, who’s been with Lyons Auto Body for 35 years, used a 50-tonne hydraulic winch attached to a large rig to lift the trailer off the woman’s car. “When you’re dealing with a life-or-death situation like that, the pressure is unbelievable,” said Matchett, who had high praise for the firefighters and other emergency workers from Peel and Halton.

“You’re only playing around with a couple of inches and there’s absolutely no room for error.” Tobiasz was taken to St. Michael’s Hospital in Toronto by air ambulance. A short time later, she walked away with no injuries. The truck driver has been charged with careless driving. The Community Hero Award is a new award that will be presented annually to someone who, over the past year, acted with extreme courage and dedication under extraordinary circumstances to make a real difference in someone’s life.

At the same event on May 16, Mississauga’s Citizen of the Year, Firefighter of the Year and the winner of the annual Police Merit Award will be honoured. The Ronald E. Sanderson Community Service Award will be presented to an exceptional local realtor.