One Slip Would Kill Woman Trapped in Car 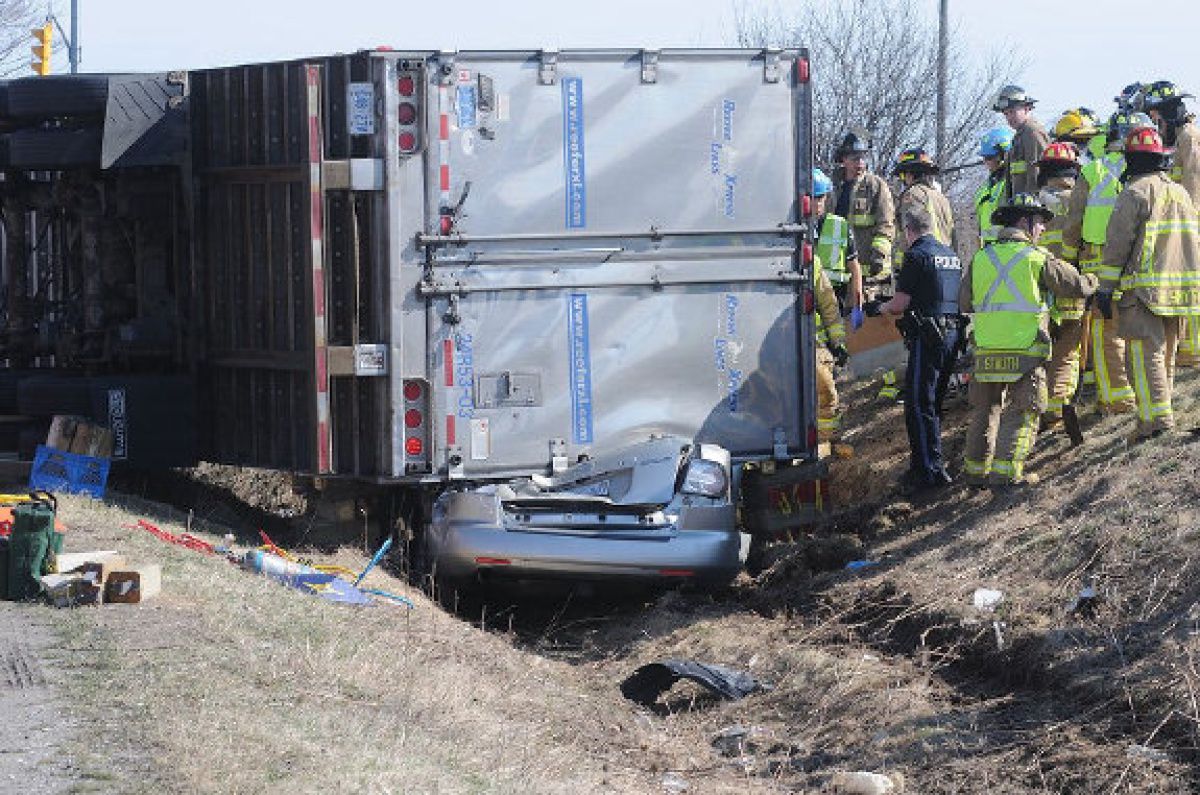 One Slip Would Kill Woman Trapped in Car

Towtruck operator Steve Matchett stands beside the rig that helped save Edyta Tobiasz’s life after a tractor trailer landed on top of her car Monday at the 403 and Dundas St. Matchett’s expertise was of great value during the rescue operation.

For two precarious hours, tow-truck operator Steve Matchett meticulously worked to lift a 14-tonne tractor-trailer, knowing that one small slip would mean death for the 36-year-old mother of two trapped underneath. Adrenalin gripped his body as he weighed the risks in lifting the massive truck that minutes earlier, had toppled over on Highway 403, crushing Edyta Tobiasz’s car.

Matchett was just one of dozens of emergency workers — including police, firefighters and EMS personnel — involved in the dramatic rescue effort Monday that saw Tobiasz emerge smiling, and almost without a scratch, something her family is calling miraculous. “We were dealing with life or death and it’s in your hands and you don’t want to screw up,” Matchett said. “I knew I had the capability and the experience, but sometimes bad things happen.”

Matchett thought he’d be performing recovery work — the opposite of a rescue — when he first saw the crash scene. But the Oakville Fire platoon chief told him a woman sat trapped in the crumpled car, alive. They needed Matchett’s big rig and his expertise to help save her. So he tore off to grab the truck from Lyons Auto Body, all the while choreographing the rescue effort in his mind. The tractor trailer that weighed nearly 14,000 kilograms lay precariously on top of Tobiasz’s car in a deep ditch, but the ground was too wet and soft, which meant he needed to extend the boom while parked on the road. Matchett wrapped two straps, strong enough to hold 23,000 kilograms each, underneath the trailer, over the hood of the car and back up the other side to the boom.

Then Matchett snuck underneath the wreck to speak to Tobiasz. “You’re going to hear some noise, but that’s us lifting this off you so we can get you out,” Matchett recalled telling her. She laughed, nervously.
Matchett was also nervous, but felt confident because a few years earlier he lifted a fire truck off a car with a woman trapped inside. She broke her pelvis, but lived. After the quick chat with Tobiasz, Matchett removed himself to the ditch and began lifting the truck with the remote control. One of the senior firefighters stood by with an air horn, which would go off if work had to be stopped instantly.

Matchett, 56, understood the risks from his 35 years on the job. The trailer could collapse under its own weight as it was lifted. A small shift in any direction could kill Tobiasz. That meant the trailer needed to be pulled straight up. The lift was slow — it took an hour to raise the trailer one metre — and firefighters would periodically dive underneath to add chunks of wood to a series of makeshift pillars that supported the trailer and to check on Tobiasz. Then the air horn shattered the strange silence that had descended on the area. Matchett immediately stopped and examined everything. The straps were secure and the trailer wasn’t cracking. Everything was fine.

So he lifted again. When it was about a metre above the car, Matchett stopped. He didn’t want to move the trailer anymore. “We had more than enough room to pull her out,” Matchett said. “So why risk it?”

Then the firefighters went to work, scurrying under the low-hanging trailer to cut the driver’s side door off before paramedics swooped in and slid Tobiasz onto a spinal board. She had only minor injuries.

“I thank God for my second life,” Tobiasz said to CTV Toronto on Tuesday, “It is a miracle.”

Matchett was part of a delicately coordinated dance that saved Edyta Tobiasz’s life, but it had to be done.